skip to main | skip to sidebar

Jordan Girls Like Mike and Show and Tell It! 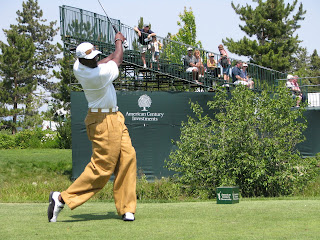 With the NBA underway, one can’t help but think of one of the shining stars that streaked across the NBA celestial skies like a shooting star but with a very very long hang time. Don’t have to mention his name. Ya’ll know…Chicago’s MJ.

It seems Chicago has been the platform for greats beyond Barack Obama! Oprah anyone? Let’s go back, way back to Abe Lincoln. Is there something in the Illinois water? Well, we’re talking about MJ, right now. Could he be working some MoJo?

Years after his Bull’s retirement, baseball, the NBA comeback, and team ownership, Jordan’s stellar light still shines and every year he attracts four constant stargazers, who have gained the named “The Jordan Girls” at the annual Lake Tahoe Celebrity Golf Tournament. 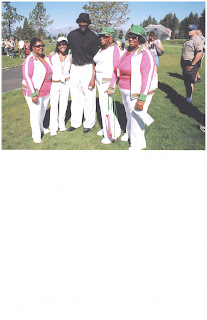 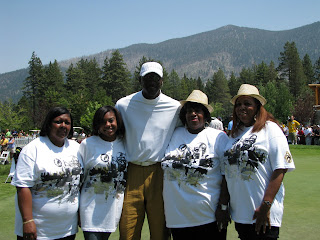 Freda and her daughter Jamese, Beverly and Donna get together in their “Jordan Aire” ware and hit to links to admire Michael Jordan. It’s a family and friendship affair that spans states. Beverly, Freda and Jamese still live in the Bay Area. Donna moved to Arizona over three years ago, but that hasn’t kept the foursome from gathering together at the Lake Tahoe Celebrity Golf Tournament every July to create some new “Did you see that Michael Jordan” memories. “It’s all in fun, we hardly get a chance to speak to him and whether we do or not that’s all right. We just want him to know that we are supporting him,” said Beverly.

“At first my mother had to drag me along, but then I started enjoying it,” said Jamese. “I not only get to see one of the greatest athletes in the world among many great athletes and entertainment celebrities, I have also made great friends my age. We text each other and email and plan to see each other each year,” she added.

Why would someone travel across state lines for a Jordan moment? “It’s my friends. Sometimes we catch Jordan’s eye and he’ll give a holla as he walks the links and that’s good, but most of all it’s the camaraderie,” said Donna. “Tahoe is beautiful in and of itself and I have beautiful friends; can’t beat that!” 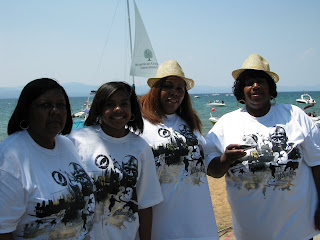 The major coup for Beverly during the past “Jordan watching” stint was not only scoring a photo with the girls and Jordan for the second consecutive year, but also getting his signature on a pair of baby Aire Jordan’s for her grandbaby! “I love Michael Jordan and have followed him since he played ball in North Carolina and I want my grandbaby to know that I respect excellence and he can be excellent too!” 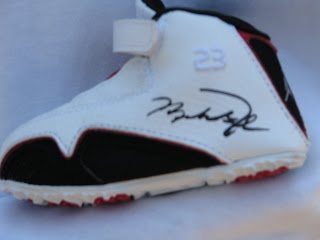 “It’s all about fun getting together,” said Freda. “Jaimese was about 7 when we started our annual trek and now she’s a teenager enjoying time with her mom and her mom’s friends and she’s making her own friends.”

The four are dedicated to not only getting together but also being fashionably coordinated in the latest “Jordan Aires” and casual ware. Beverly was the only one without the latest shoes that everyone was to wear the second day of the tournament, so she drove over 100 miles the night before from Lake Tahoe to Sacramento to pick up her shoes so she’d be in synchronistic step with the her fellow “Jordan Girls.”

Special Thanks to Weidinger Public Relations
and Lake Tahoe's "Best Kept Secret," The Horizon Casino Resort.
Posted by Justice at 10:17 AM No comments: